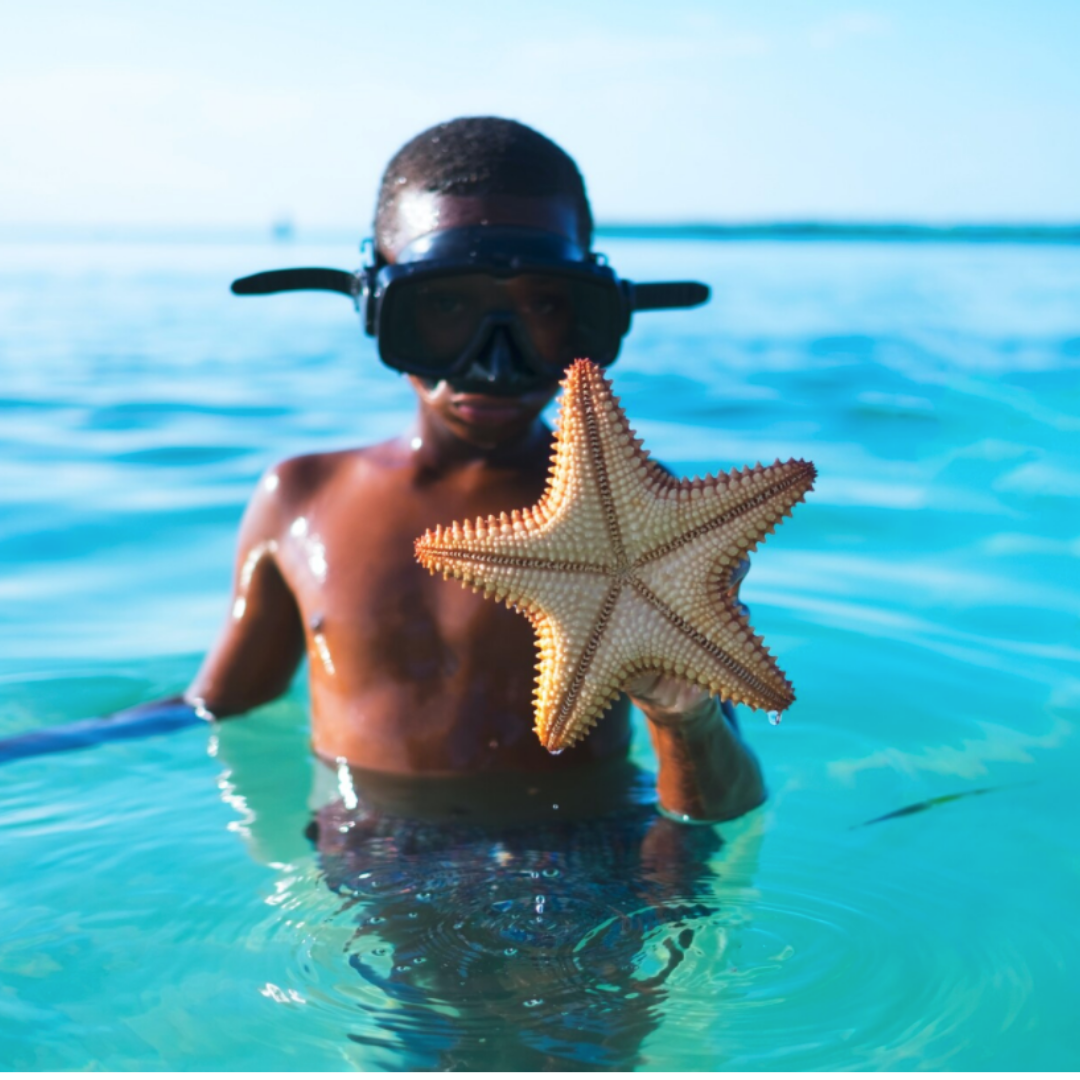 I’ve always had an affinity for the outdoors and sought to connect with nature from an early age. I remember the bee stings I received from being overly curious with nature and appearing in early photographs holding a flower that I just hand-picked. I look back on my childhood and think about how privileged I was to get to spend so much time in the outdoors. From spending time with my French friend in untouched habitats as we admired countless parrot fish along the shore, the adventure camps I participated in during the summers, to learning how to navigate the marine environment in a way that some would say was unconventional for the black community, I consider my time in the outdoors a privilege. By the time I was 12 years old, I was snorkeling around Bermuda’s coral reefs. This early exposure to the outdoors left a lasting impression on me.

I consider it a privilege because at the time, adventure camps were not affordable/accessible for everyone, which meant that many children were excluded from these activities. I was often the only person of colour in these camps, but my Dad was insistent that I become a well-rounded person and he definitely knew best! I loved the experiences, but I wasn’t a fan of being the only person of colour.

Bermuda’s population back then was 60% black and 40% white, but black Bermudians were not visibly represented in some outdoor activities, especially the marine environment partly because of access [affordability] and maybe because of the historical legacy or the images we often saw of people in the outdoors did not look like us. Thankfully, this is changing today as there are adventure camps that offer access to kids who would otherwise be excluded due to cost. Due to travelling restrictions, many of us find ourselves unable or unwilling to travel at present. For this reason, we all need the outdoors, now more than ever.

Recently, these memories have become more vivid as I find myself spending more time on the island in the outdoors due to the pandemic. Normally, like most, I would have taken a few trips overseas to have an adventure, but with travel changing, I find myself travelling locally more. As soon as the sheltering in place lifted in May, I started searching for ways to get out into the outdoors, in particular, how I could enjoy a kayak experience. There’s just something about taking a slow kayak cruise out on the water. The tranquility and peace of the experience are indescribable, not to mention the types of wildlife you can come across. As the summer rolled on, I began to venture out more and more.

The Health Benefits of Being in the Outdoors

Right now, one of the safest places to be is outside in the fresh air soaking up the vitamin D from the sun. Studies have shown that the outdoors has many benefits to our well-being and mental and physical health. Honestly, we didn’t need a study to tell us how great the outdoors is for us as I think we can all attest to how great we feel after spending time outdoors.

This is so much more important right now as the global pandemic has had an unprecedented effect on the mental health of so many.

Despite the many benefits of spending time in nature, not everyone is able to freely access all the splendor of nature. We’ve heard stories from the U.S. about how urban populations don’t have proper access to the outdoors. Regrettably, there have also been stories reported from the US and UK from people of colour who can access the outdoors, but who also fear for their safety at the same time. All too common in the news are people of colour being treated suspiciously, threatened or even being killed as a result of being in the outdoors.

Although a slightly different scenario in Bermuda, skin colour did determine where one could or could not venture in the outdoors as a result of slavery, followed by segregation and this construct may still exist in the minds of some today. Today, the island boasts of beautiful beaches and parks which are for the most part free to everyone. Today, for most residents, it is fairly easy to access beaches, our parks or the vast Railway Trail. Yet, when venturing into the outdoors and certain outdoor activities, there is still a lack of diversity. Is it that the legacy of segregation still exists or maybe we are bombarded with American television that traditionally does not market outdoor activities to people of colour? It’s often the case that when you don’t see yourself represented in an activity or otherwise, it’s difficult to connect with it. This disconnection can create self-limiting beliefs and opportunities can be lost.

The world is changing as the impact of climate change continues to accelerate, having dramatic effects on our natural environment and oceans. Ocean pollution has also reached monumental proportions. As the world struggles to come up with effective solutions, privilege continues to raise its head as the conversation remains an exclusive one. Ironically, climate change is impacting people of colour around the world at a disproportionate rate, yet people of colour are seldom represented in conversations to create solutions.

In addition to being unable to conceive writing this piece, I also would not have been able to develop such a great sense of environmental stewardship, had it not been for my early introduction to the outdoors. You see, that early introduction fostered a connection that allowed me to understand nature better and gain a better appreciation for it. It’s hard to achieve this when you have no connection to it.

Today, children around the world are spending more time indoors and in front of screens. In addition to connecting with nature, spending time outdoors and outdoor learning has been shown to improve children’s health, engages them with learning, leads to a greater connection with nature and teaches critical life skills such as resilience, teamwork and creativity. This has led to Outdoor Classroom Day, recognized on 20 May 2021.

Giving young people early exposure to the outdoors can lead to a lifetime of connectedness and an inherent desire to want to protect nature. There are many local organisations that are leading the way in this area that must be commended. These organisations are also increasing access, diversity and inclusion for young people to participate in outdoor activities and learn about our environment. I’m almost certain that their efforts will lead to young people of all backgrounds furthering their love of the outdoors by considering environmental and marine careers and eventually taking on leadership roles.

Notwithstanding this, we must also remember that much of the younger generation is now leading the way to raise awareness of issues affecting our island and the planet in general. On Instagram there is a diverse range of young people in Bermuda and abroad who have become advocates for our environment such as highlighting the impacts of climate change. This may be the impetus for creating a more diverse, equitable and inclusive leadership in environmental stewardship. I am optimistic about the future of Bermuda’s outdoors – one that will be shaped by inclusivity, equity and diverseness.

This article originally appeared in Bernews on 11 May 2021.